The Southern Garden History Society was founded in 1982 by a small group of garden historians in Winston-Salem, North Carolina. They envisioned a society that fostered research, study and a greater appreciation of historic landscapes and gardens across the South. From its modest beginnings, the society has prospered for more than 30 years, thanks to the hard work, dedication and commitment of many people.

The founders of the society were William Lanier Hunt of Chapel Hill, John Baxton Flowers III of Hendersonville and Flora Ann Bynum of Winston-Salem.

The founding board members were:

The society held its first Annual Meeting in April 1983 in Atlanta, Georgia. The Annual Meeting is held each spring in a different location in the South for the purposes of studying the garden and landscape history of that area, creating further interest in garden history and restoration in the area, and stimulating interchange of information and ideas among members.

In 2013, the Society celebrated its 30th anniversary and published a commemorative program for the Annual Meeting.

The society began publishing Magnolia, a quarterly journal, in 1984. The first edition noted the significance of the chosen name:

What more appropriate name for a newsletter of the Southern Garden History Society than Magnolia. Early naturalists visiting our southern states exulted in the beauty and majesty of this imposing evergreen tree native only to the region. Among all of our indigenous plants, Magnolia grandiflora has through the years come to be regarded uniquely as a symbol for the South.

In the ensuing years, Magnolia has published many scholarly articles on historic gardens and landscapes and restoration efforts throughout the south. It has served as a valuable resource for scholars, libraries and our members. 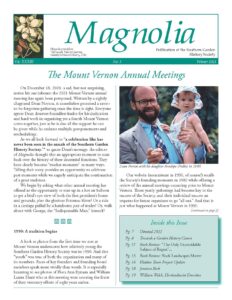