We regret to report that changing times and shifting museum directions have determined this conference will no longer be offered. It was from this Winston-Salem-based event that in 1982 the Southern Garden History Society (SGHS) came into being, and we view its end with sadness. SGHS saw this as one of the pillars of our educational commitment, and we will miss working with our co-sponsors, including Old Salem Museums & Gardens and Reynolda House Museum of American Art.

Upcoming issues of our journal, Magnolia, will examine some of the Restoring Southern Gardens and Landscapes (RSGL) programs, beginning in 1979. This website will also offer visitors a look at several of the proceedings published in follow-up to conferences.

Below you will find information on the final RSGL conference, held in 2019, along with a link to a remarkable World War II film on the Tuskegee Airmen, showing the work of landscape architect David Augustus Williston. As well, each RSGL conference is listed beginning in 1979. Click on the date to see a program for the specific event, each of which reviews speakers, topics, and activities covered during that conference. Due to time constraints, Mr. Wilson was unable to conclude his presentation with the documentary video “Wings for This Man.” Mr. Wilson states: “Wings for This Man” was filmed in 1941 by the U.S. Air Force and narrated by Des Moines, Iowa sportscaster Ronald Reagan. It is the only film record of landscape architect David Augustus Williston’s (1868-1962) landscape design and civil engineering of the Tuskegee Airfield (1941) where the legendary “Tuskegee Airmen” trained. Until now the declassified film has not been publicly viewed.

Please click on the image of the film to view: 2017 – Gardening in a Golden Age: Southern Gardens & Landscapes of the Early 20th Century and the Challenges to Their Preservation

2015 – Learning from the Past/Planting for the Future

2011 – A New World: Naturalists and Artists in the American South

2009 – Returning to Our Roots: Planting and Replanting the Historic Southern Garden

2005 – Unearthing the Past, Planting the Future: Issues and Challenges in Southern Landscape Restoration

2003 – A Genius & His Legacy: Frederick Law Olmsted in the South

1999 – Plans and Plants of the Southern Landscape

1995 – The Influence of Women on the Southern Landscape

1993 – Many People, Many Cultures: The Shaping of the Southern Landscape

1989 – Gardening for Pleasure in the South

1979 – Restoring Southern Gardens and Landscapes: A Conference for the States of the Upper South 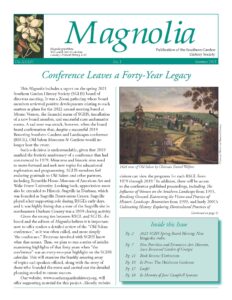 In the news! Check out this great garden story in

CONGRATULATIONS To our own @cornettpeggy for bein

THE GARDEN CLUB OF GEORGIA 🌱 2021 Historic

Many of you may have noticed a little more activit

Another indication that autumn is upon us! 📷 @

A sure sign of the onset of autumn in the south!