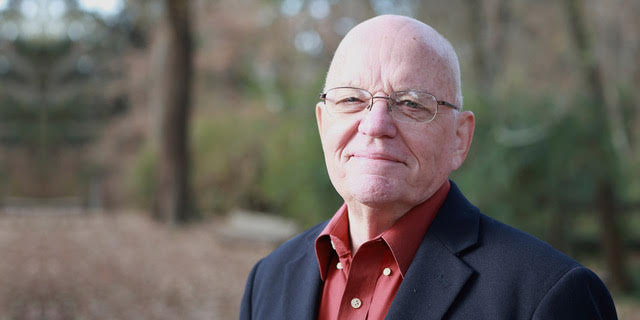 Once in a blue moon, a person comes along in your life that epitomizes kindness, graciousness, intelligence, dedication, and leadership. Our Southern Garden History Society founding mother, Flora Ann Bynum, was one of those. Another was Dr. Neil G. Odenwald, who passed away April 26, 2021, at the age of 85.

I am not sure when I first met Dr. Odenwald, but I am sure that my mentor Dr. William C. Welch connected me with him. Dr. Welch and Dr. Odenwald were roommates studying landscape architecture at LSU years ago.

I was working in San Antonio as the Bexar County horticulturist for the Texas Agricultural Extension Service, and Bill had Neil contact me about growing and selling unique Southern plants at the Southern Garden Symposium in St. Francisville, Louisiana. Another mentor, Dr. Jerry Parsons, helped me produce and box the plants, which I delivered to my very first Southern Garden Symposium and inaugural trip to Hemingbough and St. Francisville. Like most others, I was charmed.

I remember meeting Dr. Odenwald on the terrace and unboxing and showing the plants to him. He then asked, “How much will they be?” Being my first specialty plant sale and the worst salesman that ever lived, Neil immediately said, “Oh no! Not enough! Double the price!” I have tears in my eyes writing this because it was the first of many life lessons from Neil Odenwald. He wasn’t telling me to double the price because he wanted to make more money off the attendees at the symposium. He was doubling the price because he was looking after a young, “bless his heart,” horticulturist that wasn’t bright enough to factor in time, travel, and expertise. Dr. Odenwald was kind, generous, and above all else, a teacher.

I took a date to my first of numerous later visits to Ralph and Kacoo’s in Baton Rouge. I ordered appetizers, meals, and desserts, thinking the whole time that I only had this money because of Dr. Odenwald’s generosity.

I went on to attend and speak at several other Southern Garden Symposiums orchestrated by Dr. Odenwald, as well as the Biedenharn Museum and Garden programs that he put together. I also had the fortunate opportunity to visit his homes and gardens, to learn from his consulting projects at Rosedown Plantation and Afton Villa, and to see him at other programs where we both spoke, including Dr. Welch’s Landscape Design Study Courses at Texas A&M. Every time I ever saw him, it was more of the same. People like Dr. Odenwald both inspire and embarrass me because they are exactly how I know I should be. Of course, nobody’s perfect, and I’m sure his family could probably tell me he had faults, but I never once heard an angry or mean word cross his lips, never once saw him frustrated with programs or attendees, and never once experienced anything but his graceful manner.

I was just one of the countless others that Dr. Odenwald impacted in his life. Dr. Welch, who went on to a distinguished career as the Extension Landscape Specialist for the Texas A&M AgriLife Extension Service and past president of the Southern Garden History Society, had these comments. “He found ways to work through organizations to get changes done, and his being the head of the landscape architecture department at LSU gave him opportunities. I don’t know much more than to say his life made a big difference. And I think it’ll continue to influence people.”

Allen Owings, Professor Emeritus in Horticulture for the LSU Ag Center, offered: “Neil meant so much to so many. His love of horticulture and landscaping was an inspiration to all.”

And Laurie Drummond, daughter of the late Marion Drummond, a long time Southern Garden History Society member, went on to comment: “My mother, who returned to college for her master’s in landscape architecture at the age of 60, took classes with Neil and over time they became friends and colleagues. She had so many lovely things to say about him — and the many times I interacted with him, he was beyond gracious as well as hilarious, including at my mother’s memorial service. The world is a little duller without Neil in it.

Randy Harelson, our current vice president, added: “I once followed Neil on a speaking docket for the Alabama Master Gardeners before an auditorium of about 500 people. Neil gave the finest, most concise overview of the principles of home garden design I ever heard. He was so clear, so to the point, with his classic sense of humor keeping it all non-threatening and accessible for everyone in that room. I have never forgotten that wonderful talk and his brilliance as a teacher.”

Dr. Odenwald authored one of the first thorough plant identification books for the South and among the first I ever owned. Southern Plants: Identification, Selection and Use of Southern Plants: For Landscape Design (Claitor’s Publishing, 1987) is now in its 4th edition. Dr. Welch and Dr. Odenwald also published The Bountiful Flower Garden (Taylor Publishing, 2000) among the first books for the South to promote growing and using home-grown cut-flowers. I’ll never forget working with Neil and Bill on two different funerals for their loved ones, where they arranged real garden flowers, including large blooming branches. And when one of my college-aged nephews asked if there was any book about attracting birds to the garden, I told him there sure was, I knew the authors, even had a few photographs published in it, and loaned him a signed copy of Attracting Birds to Southern Gardens by Tom Pope, Neil Odenwald, and Charles Fryling (Taylor Publishing, 1993).

There were more, but you get the point. Dr. Welch was more than correct. Neil made a difference. No kinder, more gracious, talented, motivated teacher, artist, and mentor ever lived. The world is a far more beautiful place because Dr. Neil Odenwald lived in it.