One of the earliest of the many SGHS/DO collaborations was in 1985 when Dumbarton Oaks and Harvard University Press published Popular Annuals of Eastern North America, 1865 – 1914 written by Peggy Cornett, our editor of Magnolia and Monticello’s curator of plants, in partial fulfillment for her degree of Master of Science from the University of Delaware’s Longwood Graduate Program. Studying rare books, catalogue collections, seed and plant lists (some within the Dumbarton Oaks library), Peggy documented in her book the cultivation and use of a selection of annuals, including among others China asters, California poppies, marigolds, and zinnias, which were popular during the fifty-year period of great change after the Civil War.

In May 1990, SGHS member Richard Westmacott, professor at the School of Environmental Design, University of Georgia, contributed to the fourteenth Dumbarton Oaks Colloquium on the History of Landscape Architecture (published in 1993 as The Vernacular Garden) with his paper The Gardens of African-Americans in the Rural South. Richard’s findings were based on the study of three sites in the South, one in the Georgia Piedmont, one in the Low Country of South Carolina, and one in the Black Belt of Alabama.

For the Spring 1992 issue of Magnolia, in The Gardens and Yards of African-Americans in the Rural South, Richard wrote further of his attempt to understand better the traditions of African-American gardens. At these three sites, he spoke with gardeners who were at least fifty years old and who remembered the gardens of their parents. His book on the subject The Gardens and Yards of African-Americans in the Rural South was published in Fall 1992. Richard spoke further of his research in the talk The African-American Influence at the 1993 Ninth Conference on Restoring Southern Gardens and Landscapes, co-sponsored by the Southern Garden History Society, Old Salem, the Museum of Early Southern Decorative Arts, Reynolda, and Stagville. Ken McFarland reviewed the conference and Richard’s talk in Old Salem Conference Explores Diversity of Southern Cultural Landscape,  Magnolia, Vol. X, No. 2.

Suzanne Turner, in her essay, Roots of a Regional Garden Tradition: The Drawings of the New Orleans Notarial Archives, examines the oversized, measured, nineteenth-century architectural watercolors of the Latin Quarter and Garden District contained within the Notarial Archives to understand the origins of New Orleans gardens of today. SGHS member, Sally Reeves, as archivist for the Archives for over forty years, helped to orchestrate the funding, conservation, photography, and research into the 5,500 drawings within the collection.  As part of the SGHS 2004 annual meeting, reviewed by Peggy Cornett in Magnolia Vol. XIX, No. 2., Sally arranged visits to gardens in the French Quarter and Garden District documented within these drawings. Sally’s and Suzanne’s work has dovetailed in other projects. In 2008, Suzanne, who is professor emeritus of landscape architecture at LSU, completed the New Orleans City Park Cultural Landscape Report, the park that Sally had documented in History of City Park New Orleans, published in 2000.

Of special note, Suzanne is the 2019 recipient of the first Southern Garden History Society William Lanier Hunt Award, for exceptional contribution to the field of Southern garden history. Suzanne attributes her choice of the practice of landscape architecture and study of landscape history to mentors Catherine Howett and her husband John, Suzanne’s major professor in art history at Emory University.

In addition to her immense contribution to landscape architecture and landscape history, Catherine Howett has played an important role in the history of both the Southern Garden History Society and Dumbarton Oaks. As a Southern Garden History Society charter member and the third president (1986-1988), she was instrumental in the founding and early leadership of the Society. In the years since, she has contributed numerous articles to Magnolia and edited the Society’s first Magnolia Essay, Residential Work of the Olmsted Firm in Georgia, 1893 -1937, written by Lucy Lawliss, Catherine’s graduate student at the University of Georgia.

At Dumbarton Oaks Catherine served as a Senior Fellow in Garden and Landscape Studies, planning and participating in the activities of the department for the years 1995 –2002, during which time she contributed to numerous symposia and publications.

In addition to being a friend and mentor for Suzanne and Lucy, Catherine has shaped my career and interests. During our work together on Barnsley Gardens in the 1990s, she taught me much about garden history and research and encouraged me to accept my position at Dumbarton Oaks. The year I began, in 1997, she served as a member of the Garden Advisory Committee, which offered guidelines to me that I followed until my retirement in 2018.

In 2015, Catherine was awarded the Southern Garden History Society Certificate of Merit as a person who has advanced the mission and goals of the Society.

Another important garden history scholar is SGHS member Judith Tankard, who has written and lectured extensively on Beatrix Farrand, the primary designer of the gardens at Dumbarton Oaks. Her book Beatrix Farrand: Private Gardens, Public Landscapes, reviewed by Davyd Foard Hood in Magnolia Vol. XXIII, Spring 2010, was named an Honor Book for the 2010 Historic New England Book Prize. Author and photographer Richard Cheek took many of the beautiful photographs in the book, including those in the chapter on Dumbarton Oaks. In the 2013 Beatrix Farrand colloquium at Dumbarton Oaks, Judith was the concluding speaker, her poignant talk entitled Final Chapter: From Reef Point to Garland Farm.

In addition to her book on Farrand, Judith has written ten other books of garden history. She has spoken to the Society members at several meetings including New Orleans (2004), Restoring Southern Gardens and Landscapes (2015), Cave Hill in Lexington (2017), Jacksonville (2018), and Birmingham (2019).

In 2016 Judith generously donated the Judith B. Tankard Collection, including books, periodicals, research files to the Cherokee Garden Library, which serves as the archive for the Society.

Anne, horticulturist and leader of garden restoration for twenty years at Bellefield, is the daughter of Jane Campbell Symmes, a charter member of Southern Garden History Society and an honorary board member. Anne grew up in Madison, Georgia, on Cedar Lane Farm and completed the landscape design program at the New York Botanical Garden. She currently serves as garden educator at Bellefield. 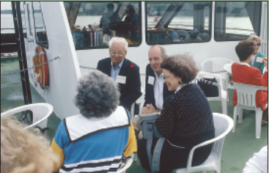 Catherine Howett (on the right) on the boat to Mount Vernon, Annual Meeting, 1990 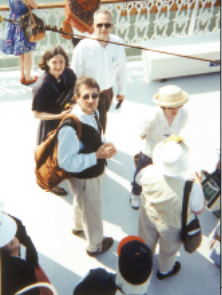 Ken McFarland, Gail Griffin, and Ed Shul on the boat, 2000

SGHS members with Don Smith in DO ellipse, 1990 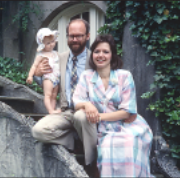 A bearded Dean Norton with wife Susanne and their first daughter Penelope at DO, 1990

One of the most delightful parts of being a member of the Southern Garden History is attending annual meetings, two of which, 1990 and 2000, have visited Dumbarton Oaks. In the blend of scholarship and fun over the weekends, friendships have formed in the years of meeting together. Fortunately, this same sense of fellowship exists between Dumbarton Oaks and the Southern Garden History Society, developed in the many years of shared endeavors. Both institutions have benefitted from the camaraderie and scholarship.

Gail Griffin is a horticulturist and retired from her position as garden director of Dumbarton Oaks. She is also the SGHS treasurer.