For many Southerners, the red spider lily (Lycoris radiata) is a wonderful surprise in the late summer garden. A delicate red flower of fine petals and long stamens perches atop a naked stem, giving it its common name. The foliage only appears once the flower begins to die back.

How the spider lily made its way into the Southern garden is an interesting story. By many accounts, the flower first appeared in New Bern, NC in the garden of Lavinia Cole Roberts. According to family history, her brother-in-law, Capt. William Roberts was with Commodore Matthew Perry when he opened Japan to American trade in 1854.  The young captain brought back Lycoris radiata bulbs for Lavinia. They were dried and did not appear to be alive, but she planted them. They first bloomed years later, sometime during the Civil War. These were the first to be grown in North America. Elizabeth Lawrence repeated this story in A Southern Garden and a legend was born. 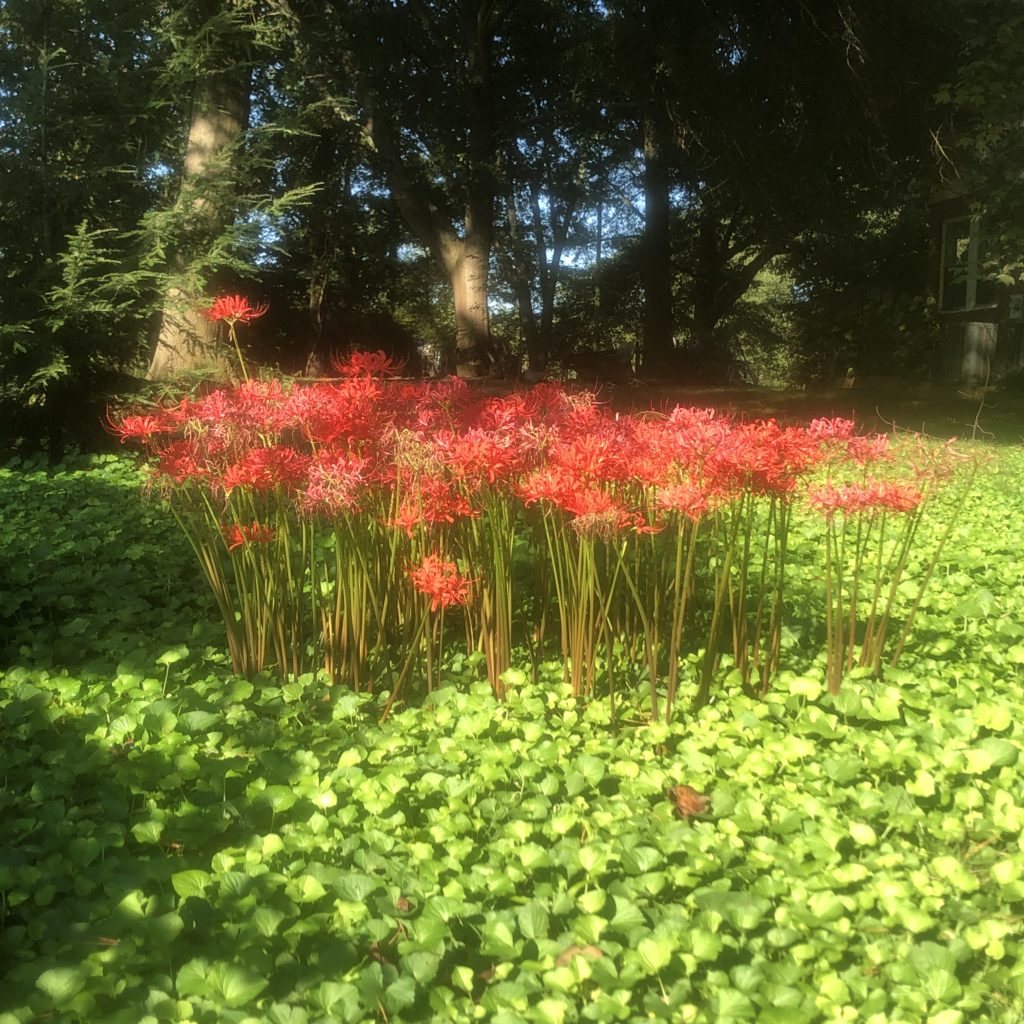 There are a few minor problems with this story. Records show William Roberts first went to Japan in 1858 as a lieutenant (he later became a captain). In addition, Lavinia married her husband, Frederick Roberts, in 1858 so while she may have known William in 1854, there was no family connection until years later. However, Lavinia was an avid gardener (a list of 83 roses she grew can be found on the SGHS Southern Plant List), so it is entirely conceivable that he did bring her bulbs back from Japan. More solid documentation of this interesting story has yet to be found.

Scott Ogden in Garden Bulbs for the South explains that there are two varieties of spider lily in Southern gardens today. Those found in old gardens are a sturdy sterile variety with an extra set of chromosomes. This genetic condition makes them extra vigorous and less picky about soil conditions. Bulbs imported after WWII have a standard number of chromosomes which makes them fertile, but less hardy. They bloom about a month earlier than their heirloom cousins.

This flowering bulb is hardy in zones 7-10 with the flower stalks reaching up to 18” while the foliage, persistent through the winter, tops out at less than a foot tall. The bulb blooms when planted at the correct depth (about six inches), but can work itself to the proper depth over several years, so patience is warranted if it does not bloom the first year. This may be why it did not bloom for Lavinia Roberts right away.