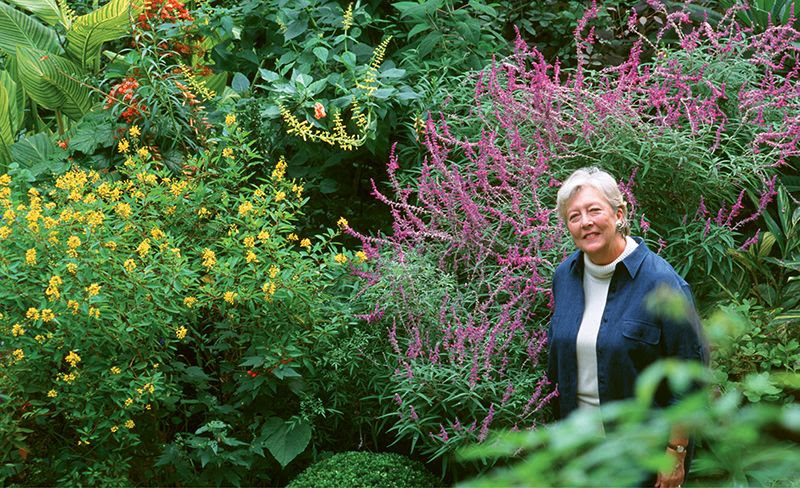 Patti McGee first appeared on my radar when I was just getting back into the professional world of horticulture after raising two children. I visited her garden on one of the spring tours and fell in love with her collection of clivias. I wonder how many people she influenced over the years with her clivias and how many of us ar

e cultivating and cherishing that collection? I know I am.

It was over 20 years ago that we became friends, when I would often call her to ask if she would put her garden on tour. She was always generous with opening her garden but she was not content with just a “warm body” as a garden docent. She wanted someone knowledgeable, with a passion for plants. That is where the “CHS Docent Course” was born. I would often docent for her and if I couldn’t, I would find someone that was the perfect fit. She quickly became my mentor and teacher and her garden became a place of learning. I often stopped by to see what new plants were in the garden that I needed to learn about and possibly even grow. If Patti was growing it, then I needed to grow it as well. I watched as her garden transitioned from a sun garden to a shade garden. Gradually, she too had to learn a whole new plant pallet. She introduced us to so many new plants and insisted the Latin name be learned as well as the common name.

Patti frequently opened her garden for out of town private groups in Charleston. She and Peter loved to entertain, especially in the garden. She had a gardening reputation from friends near and far and frequently she and her garden were the ones most requested. I don’t recall one group that she turned down and even at times, if she couldn’t be there, she would allow small groups to dine and tour the garden in her absence.

Patti was also passionate about history and especially Charleston’s rich garden history. Garden historian Jim Cothran would visit from Atlanta and between the two of them, I found myself immersed in plants and our history- and then eventually on the board of the Southern Garden History Society. Members of the Society were the rock stars of my world and I immediately had standing because I was a friend of both Patti’s and Jim’s. In 2016, I chaired the Annual Meeting of the 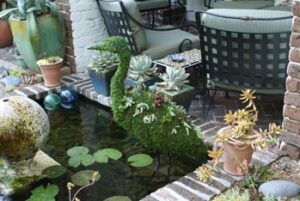 SGHS in Charleston and Patti had offered to host the Thursday night Board dinner. Not long before the event, Patti and Peter sold their beloved house and garden on Anson Street and informed me they were moving to Sullivan’s Island but not to worry, they would still host the supper. Not only was the new garden ready, she made succulent centerpieces that everyone adored.

Just last week I was able to visit with Patti and she was as optimistic as ever, planning what she wanted to add or change in the garden. I will alw 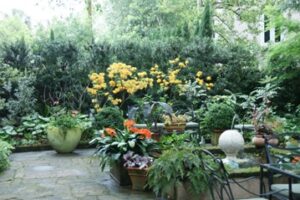 ays have fond memories of Patti as she was a dear friend, constant inspiration and teacher in my life. Thinking of her, I am reminded of the quote by Vita Sackville West “The most noteworthy thing about gardeners is that they are always optimistic, always enterprising, and never satisfied. They always look forward to doing something better than they have ever done before.” That was Patti and she will be sorely missed but her memory is well rooted in my life and garden.

Susan McLeod Epstein, Tours Manager for the Preservation Society, is steeped in the Lowcountry’s historic and contemporary gardens and knows the gardeners, designers and landscape architects as well as local history. She is married to David, an engineer by degree but architect at heart, and together they have two adult children and two grandchildren. When not working she can be found either in her garden, someone else’s garden, or managing the family farm in Camden, SC where her family has farmed for over 200 years. She is an experienced gardener herself, has worked in the tour industry for nearly two decades, and is a licensed City of Charleston Tour Guide. Susan was formally educated in horticulture, earning a Bachelor of Science in the field from Clemson University and is a South Carolina ertified Nurseryman. Recently, Susan served on the board of the Southern Garden History Society from 2010-2016 and in 2016; she organized and hosted the Southern Garden History Society’s Annual Meeting in Charleston. She returned to the board in 2019 and serves on the executive committee as secretary for Society. Annually she teaches a 25-hour docent training program through the Charleston Horticultural Society. Susan has also been documenting historic landscapes and gardens in the Lowcountry as well as throughout the state. Susan has toured gardens extensively in the US, UK, and throughout Western Europe and is always looking forward to the next trip.