This past Spring has proven to be one that most of us never want to repeat in our lifetime. It was, and still is, a time of uncertainty and introspection.  The first few weeks were a perpetual vacation but, after a while, weariness and uncertainty set in. 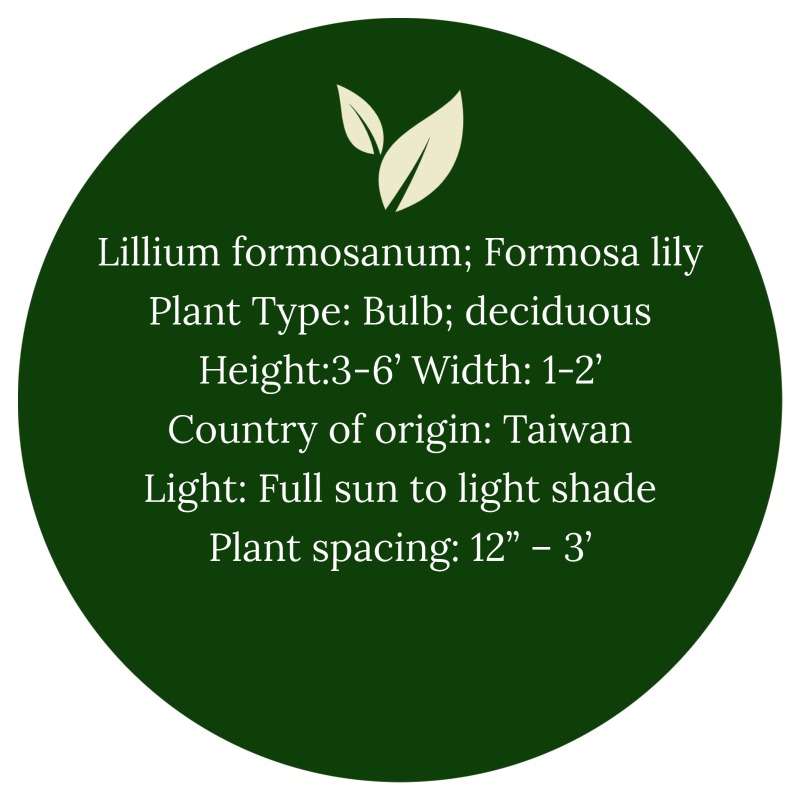 While most of my friends and family were considered essential and continued to work, my job was on hold. As Tours Manager for the Preservation Society, I work seasonally. In addition to leading a few private tours, spring is when I began planning in earnest for the annual Fall Tours, the Society’s historically largest fundraiser.  Our office was closed and, while we had occasional Zoom meetings, I was at loose ends. There was nothing for me to do but clean closets, clean house, or work in the garden.  The decision was easy: I retreated to the garden. 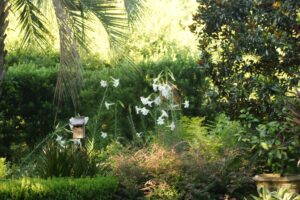 We have been in our 1934 house in West Ashley for 25 years. It has been a labor of love tending the 1.7 acres. The house sits in the center and all around I have created different garden rooms and spaces. Directly out back is the pool room and one of the most important garden space as that is what I see from almost anywhere in the house. Beds full of colorful perennials and shrubs abound with walkways connecting one space to another.  I have seen plants come and go, some on their own account and others edited out by design; bed lines have changed with turf becoming more of an area rug instead of wall to wall carpet; and design ideas coming to maturation.  I am the designer and gardener with help now and then.  At first, the restlessness of the first two months carried over. Every morning before getting out of bed, I mentally surveyed the garden and decided on the plan for the day.  On some days it was predetermined and I would continue an on-going task but other days it was a conundrum. Days when I had no plans, I often floundered, doing a little of this and some of that. It was as if I was starring in a soap opera called “As the Worm Turns.“ 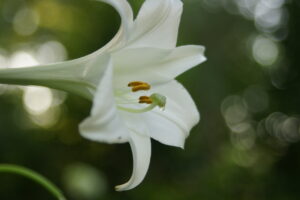 I have kept a garden journal on and off for about 15 years mostly documenting what was happening in the garden at a particular time. Once COVID began I decided to download the app “Day One” and committed to writing creatively at least twice a week.  I ended many gardening days sitting on my porch, overlooking the garden and reminiscing about a particular plant or design idea. In looking back on the entries early in the pandemic I had titles like ‘Bridge over Troubled Waters,” “Day Twenty-Two of the Quarantine,” etc., all depressing titles but descriptive of my mindset. I was searching for something but wasn’t sure what it was or how or where to find it.

Something happened around the first of May and the fog began to lift as well as my spirit and the entries and their titles in my journal. “Yucca Earns its Name-Bright Edge,” “Spreading Goodness,”  “Small Wonders,” “Fine Tuning and Max Pruning,” and so on. I don’t think I realized how downhearted I had been.  With renewed purpose and relished time spent in the garden. I began to create and celebrate nature once again.  Towards the end of May, work at the Preservation Society began, albeit slowly and I was torn.  When COVID began, I wanted to work and be around people but now I wanted nothing more than to stay home and continue in my down  (or should I say up?) and dirty world. 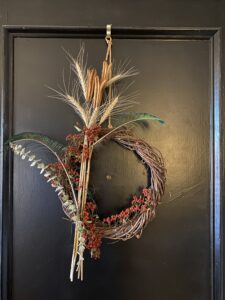 One of the highlights of summer is anticipating the Formosa lilies (Lillium formosanum).  The lilies were originally a gift from Jan MacDougal, Charleston’s Bulb Lady, a mentor and a dear friend since 2000. At a workshop at her house about 10 years ago, she let several guests dig bulbs and take them home to begin their own “Formosa collection.” I was one of the lucky recipients! In July 2018, a year before her death, Jan and her daughter-in-law came to visit the garden when the lilies were in full bloom and I could not have been more proud to show Jan my success.

Formosa lilies are bulbs that sprout in the spring and can be mistaken as a weed or unwanted grass so you have to be careful not to weed them out. Each plant grows as a single stalk 3’-6’ tall with lance-like leaves and 6-8 blooms at each terminus that begin to open in mid-July, giving way to 10” long deliciously fragrant, white trumpet flowers.  As the bloom fades and fall off, the stalks turn up and by autumn they are golden, inverted bells full of seeds. At this time, they can be cut and dried and used for arrangements throughout the year. The seeds can either be saved and shared with friends or scattered throughout the garden where they easily naturalize but are not invasive. 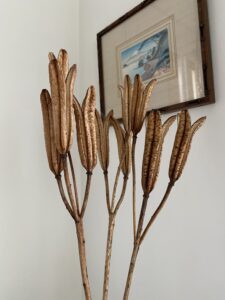 Initially I planted those first lilies in a cluster in one corner of the poolroom where I can see them from all the rooms at the back of the house. A tall podocarpus hedge serves as a backdrop creating an enclosure and a pindo palm anchors the bed. As the lilies reach maturity and their blooms began to open, it reminds me of my own personal choir of heavenly angels gathered in the choir loft, standing to sing their anthem. However this year was different. For the first time ever, the lilies in the “loft” withered and dried before they had a chance to bloom, but they were more abundant than ever scattered throughout the garden. It was as if the choir had disbanded and moved into the congregation. Instead of a choir, I now had sentinels looking over and protecting the garden beds.  They brightened each garden bed with their white petals, stunning beauty, and statuesque shape.

As summer comes to an end, I will let them go to seed and harvest the dried blooms for beautiful holiday arrangements. After Thanksgiving, they will be repurposed for Christmas by adding holly and berries. This year will be more special than ever as we gather with friends and family and count our many blessings. I will be more grateful for the simple things in life and the beauty throughout, not just the choir loft.   Next summer, I hope the choir will return to the “loft” and be stronger and more beautiful than ever, but I will also look forward to the sentinels spread throughout, protecting and spreading happiness wherever they happen to land. 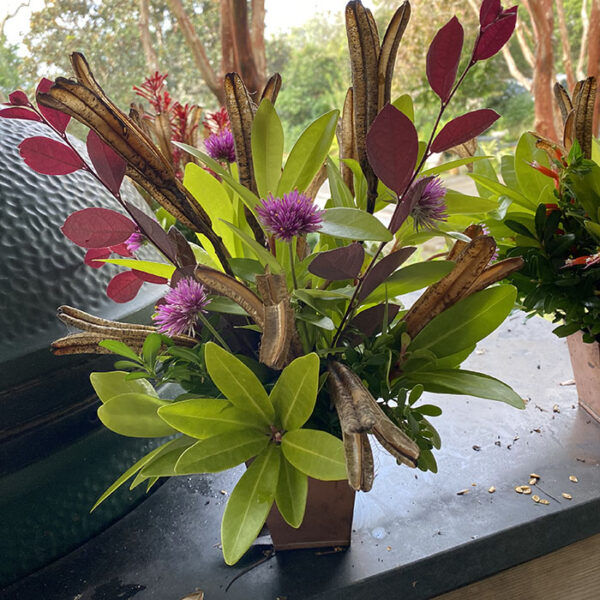 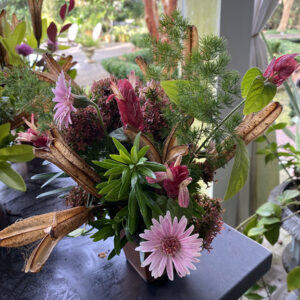 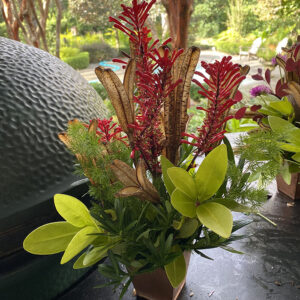 Susan McLeod Epstein, Tours Manager for the Preservation Society, is steeped in the Lowcountry’s historic and contemporary gardens and knows the gardeners, designers and landscape architects as well as local history. She is married to David, an engineer by degree but architect at heart, and together they have two adult children and two grandchildren. When not working she can be found either in her garden, someone else’s garden, or managing the family farm in Camden, SC where her family has farmed for over 200 years. She is an experienced gardener herself, has worked in the tour industry for nearly two decades, and is a licensed City of Charleston Tour Guide. Susan was formally educated in horticulture, earning a Bachelor of Science in the field from Clemson University and is a South Carolina ertified Nurseryman. Recently, Susan served on the board of the Southern Garden History Society from 2010-2016 and in 2016; she organized and hosted the Southern Garden History Society’s Annual Meeting in Charleston. She returned to the board in 2019 and serves on the executive committee as secretary for Society. Annually she teaches a 25-hour docent training program through the Charleston Horticultural Society. Susan has also been documenting historic landscapes and gardens in the Lowcountry as well as throughout the state. Susan has toured gardens extensively in the US, UK, and throughout Western Europe and is always looking forward to the next trip.