Visitors to the Events page now have access to three publications that reflect the high quality of the RSGL conference, spanning its history from 1979-2019. Under the strong guidance of Flora Ann Bynum, the RSGL planning committee was able to publish proceedings for 1995, 1997, and 2001 events. They appeared to general acclaim and found a place not only on many bookshelves but also in university classrooms. SGHS is now pleased to offer not only our members but any site visitor electronic access to these documents, which examine the themes “The Influence of Women on the Southern Landscape,” “Breaking Ground: Examining the Vision and Practice of Historic Landscape Restoration,” and “Cultivating History: Exploring Horticultural Practices of the Southern Gardener.” The sterling array of speakers joined to a wide range of compelling subjects reflect in microcosm the high quality of programs offered by RSGL throughout its history. It is hoped these proceedings bring as much satisfaction today as they did to readers over two decades ago. 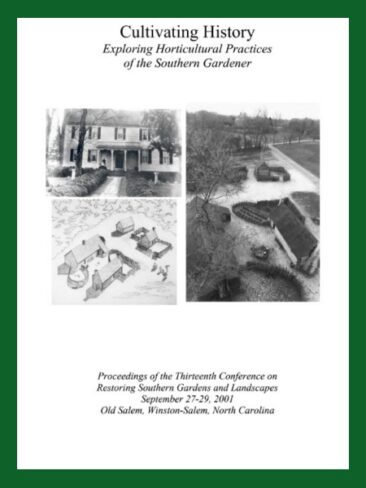